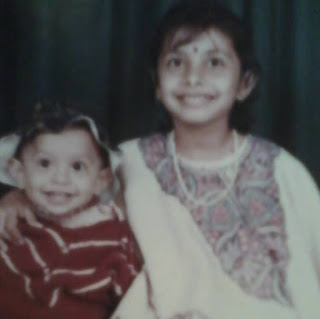 "If I do not have a kid, then I will get anyone." These were my thoughts when I tugged to the little fountain of the girl of our family friends.

All of my best friends had a brother or sister and my BFF had a little and cute sister. I felt alone, every Rakshabandhan, I would tie a "Rakhi" around my wrist and roam around.

I was a single child for the first six years of my life. It means no sharing, but somehow I never liked it. I wanted someone to share the joy and happiness. Someone, other than dolls and trees to talk. I wanted to teach, take care of a person other than these inanimate dolls.

At the same time my best friend unwittingly planted the idea that sisters are better than brothers as they never tease. I rushed to my mother and said I want a sister. My mother explained it is better to have a brother (she wanted variety in kids, and now I too want the same if and when I become a Mother).

The day came in, I got the news that there will be a little one soon. I rushed the next day to school and spread the word. I was elated and happy for the entire span of nine months. I went with my Mother for every check up. We lived in a place called Mahasamund and had to travel fifty six kilometres for a decent check up in Raipur. Mom's check up was a Family's day out and thanks to my father's and his family man persona, we never could complain of rarity when it came to spending time with family.

I was the responsible one, I would tag along with Maa. Stand in the line. I thought, why are they making my Mom stand?  I wanted to sneak into the chamber but the friendly doctor just smiled and kept me away.

Every week, actually every day I saw my mother change and take those syrups that have oranges on them. She used to feed me, while standing and that was a little weird because before she sat.

Then the day came, it was the first day of November, Diwali just went away 6 days back. My Mom was feeding me, she had to go to the hospital to get admitted. She was tensed, I was a quiet child but will not eat, sleep or do anything without my Maa. The worst, I will never throw tantrums, I may cry silently. My Grandmother reassured that every thing will go fine, but then it is Mother's heart that refuses to believe.

She was almost done feeding me, when she could not stand it anymore. My brother decided to come out just then. It was a Sunday, I was crying in my Father's lap for four hours and my father was crying more. It was a complex situation and it was no hospital, we never had a time for hospital so, it was a home birth with complications.

The time was fifteen past three in the afternoon, when i heard my brother cry.

I rushed into the room (my future room) to see a small, white, crumpled baby, he looked at me and puked. I thought he was, ugly but then he is family I have to love him.

Then after few minutes, the thought came "My brother is elder to me even after he came late as he is born in November and I, in December."

I cried a lot circling the matter. A few days after the next whim I threw was, my brother will not play with me and falls asleep every time he is in my lap. Somehow my mother calmed me down this time again.

He was very fond of my report cards and books. He tore the pages and gave out a smile. I pointed and said, he is deliberately doing it, look at his smile, my mother said how can a three month old do it deliberately. Well he sat independently as a four and half month old. He wet my report card and I swear I saw him smiling at me again. It was natural, from the moment he was born, he took it a serious business to drive me crazy.

Have you read the nursery rhyme "Mary had a little lamb." My brother was my little lamb, everywhere I went he will go with me. I licked the cream out of cream biscuits and he did the same. I liquefied the last bit of my ice cream brick, he did the same. He played out only when I went out.

We changed towns when he was three and I was nine. By the time, he had adeptly made my every toy car out of order. I was his translator for Cartoon Network and Discovery Channel (I guess I owe my language comprehension skills to him)

He would drive people crazy with questions (even Mom and Dad). I answered him and that is why I know more than many. I had to keep up with the "Question Hurricane".

We never told on each other. Whatever, were the differences, we sort it out by fighting it like pros while Maa was having her noon siesta after lunch. Every odd day Maa will wake up to find us with disheveled hair and red cheeks. She would ask but we never told.

I went to college and the fights stopped. My brother still irritates me, but is is the most precious thing that I possess in life. I love when he is sarcastic with me. Maa says that my brother should limit insulting me but I never mind. (I want a son who is his exact copy)