Canvas Kolkata and Beyond: Bishnupur 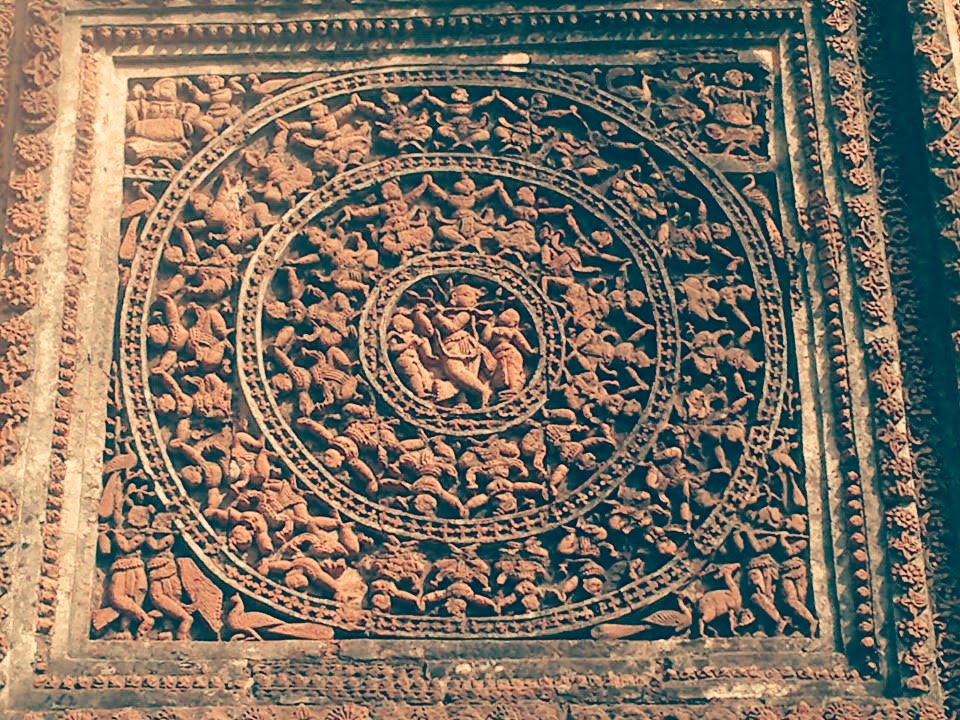 Bored in the city? nowhere to go? Digha is a second home as you have been there innumerable times, the city lights are deluding you?
Been in the city for the first time want to see and brag about friends about something they don't know about the state?
In both the cases here is your saviour, here is your option: Bishnupur, situated 150 km. off Kolkata in the Bankura District the small town of Bishnupur has for you a modestly good offering of terracotta temples and all those die hard Temple means Khajuraho fans yes it is not as spectacular as Khajuraho but it's sure worth a watch. 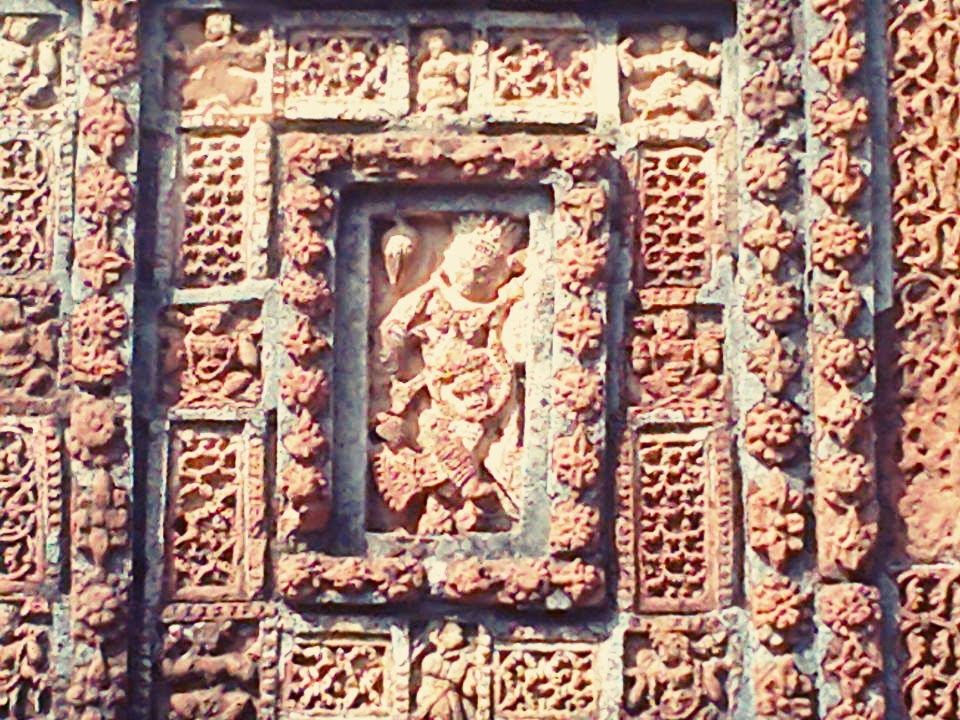 Transportation: What started as a statement "I am so bored we don't even go anywhere" from my end while having morning tea at 9:00 am one lazy Saturday morning landed us (me and my husband) in the Esplanade Bus Stop Of Kolkata scouting for buses, statutory warning the government buses leave early in the morning but then we got a private local bus leaving at 11:50 am the tickets were charged rs. 90 per head, this was supposed to be a cattle class bus that many sophisticated people might frown upon but had a fair amount of students, families traveling. it was nice seeing the people  from all the strata of the society mingling together, all were having a good time, students going to their homes, families for a vacation, the farmers and the artisans were happy that their goods got the price they hoped for and I, well, I was just happy traveling. The bus started well picking people all the way and creating a good crowded affair of it, it almost stopped everywhere people showed their hands, it took a route via Dankuni-Arambagh-Jairambati-Kamarpukur route. We reached at around 5:30 to 6 pm in the evening and guess by that time the town had nothing to offer us so we camped for the night in a near by lodge beside the Bus Stand, The lodge was named Meghmallar, and a room cost us Rs. 250 and now do not expect it to a very grand accommodation it was just enough to spend the night somehow, statutory warning: people with OCD need not stay there as you might land up in a coma but people like me who love to be on the move have stayed in hostels and lodges love street food more than five star restaurant food its cheap and reasonable. 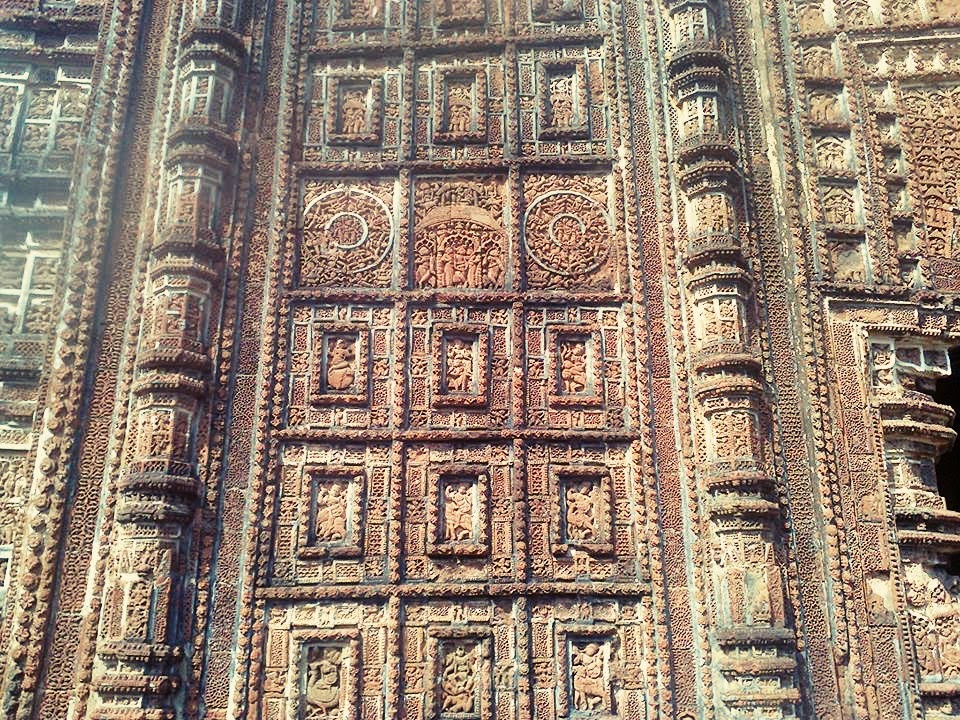 We woke up at 6:00 am sharp next morning, it was still winters (January end) we went for a walk, the town is nice it has a sense of calm to it, people are laid back and I remembered my childhood in a town of Chattisgarh. We came back and checked out of the lodge sharp at eight o'clock. We had a small backpack as a luggage so, it wasn't a botherance. We hired a Cycle Rickshaw which charged us rs. 250 for three hours. The town is small and it is the best way to travel as the rickshaw drivers double up as a local tourist guide. 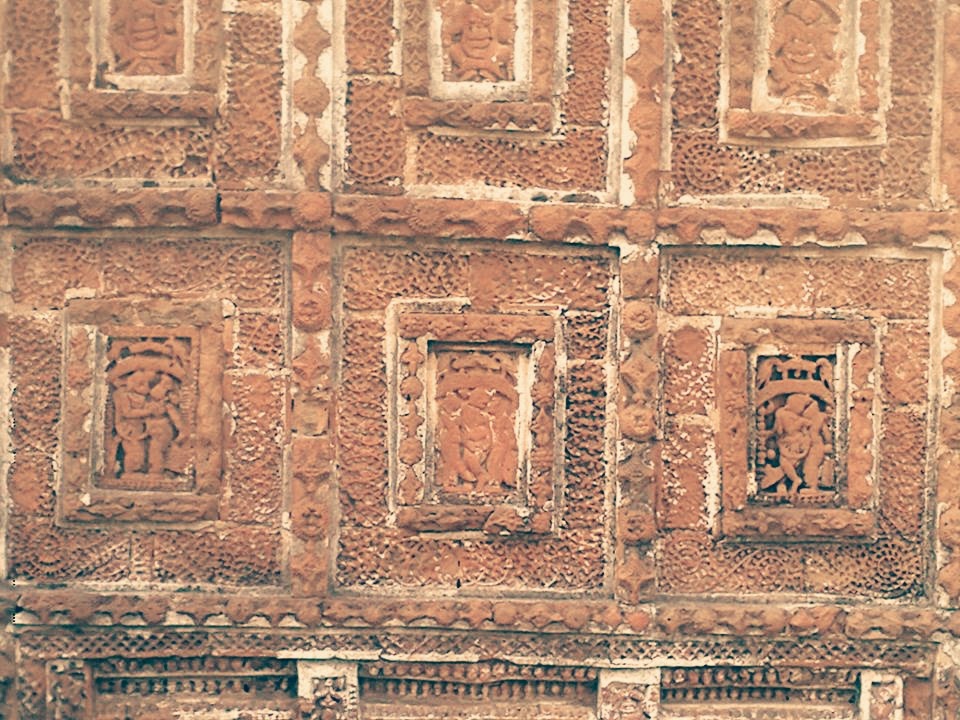 The temples are all terracotta, with fine craftsmanship on their walls, the panels depict tales from The Ramayana, The Mahabharata and folklore.the upper panels depict this stories whereas the panels at the base generally have animal figurines. 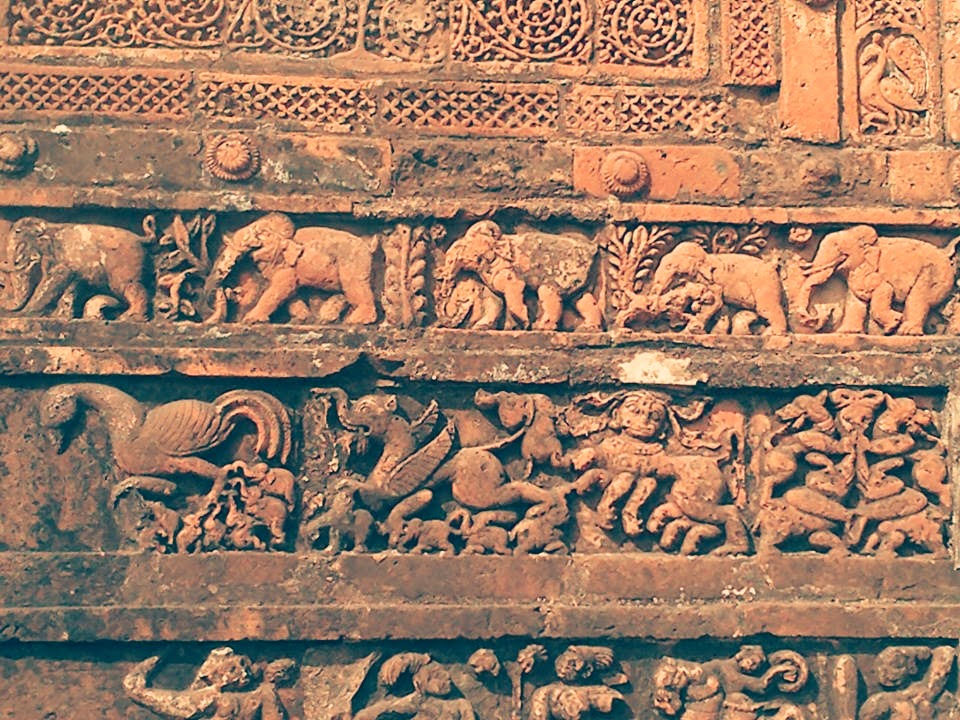 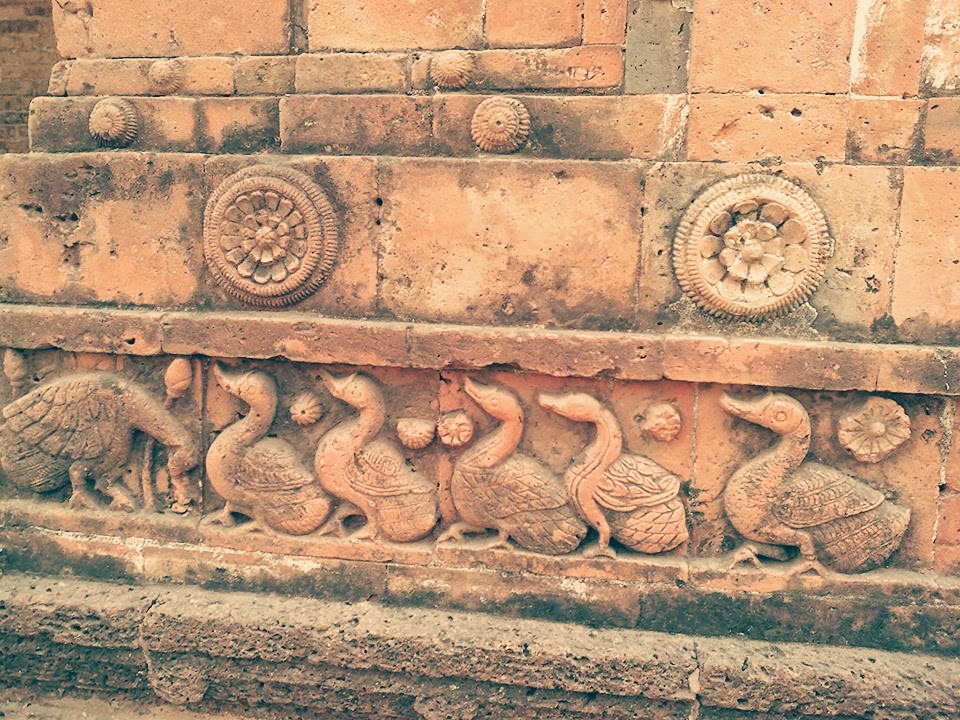 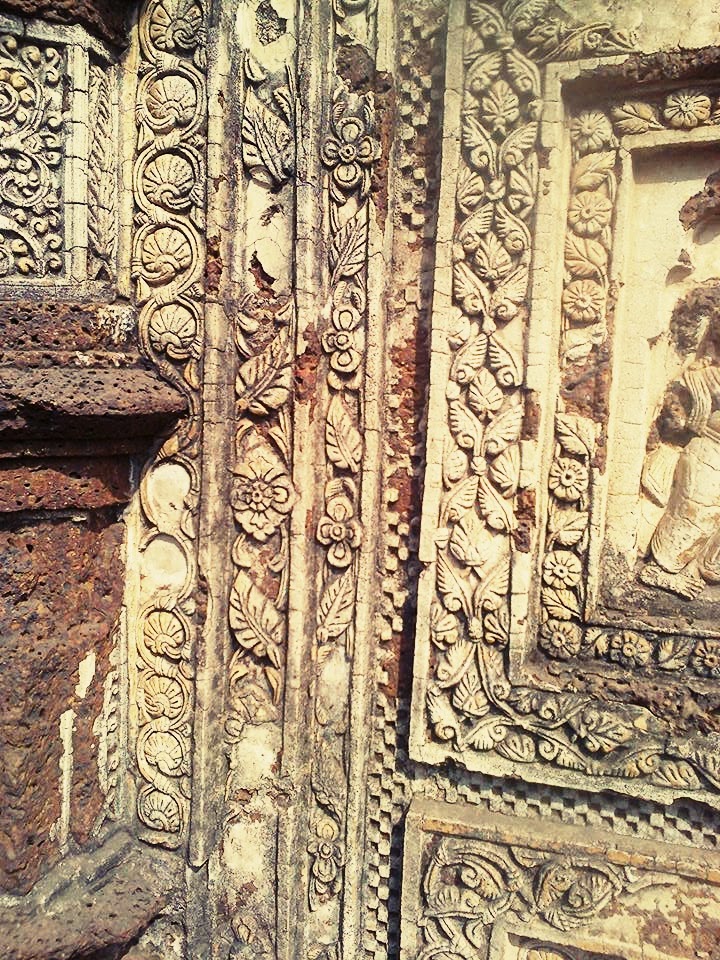 The Terracotta Temples originally had beautiful white coatings made of burnt white clay which was polished but time and lack of maintenance has eroded that. 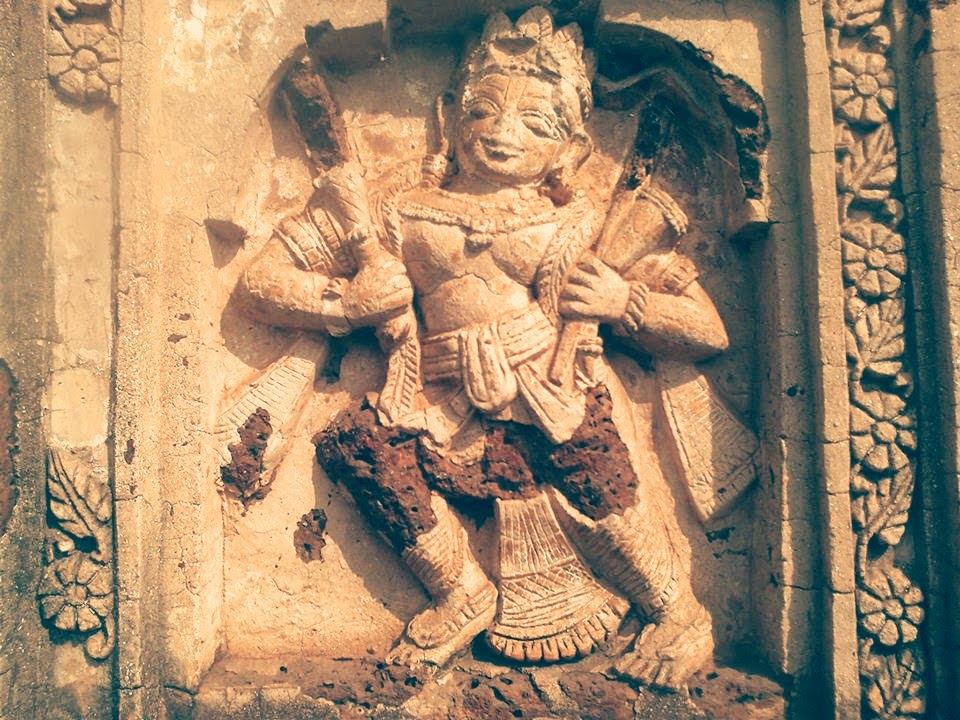 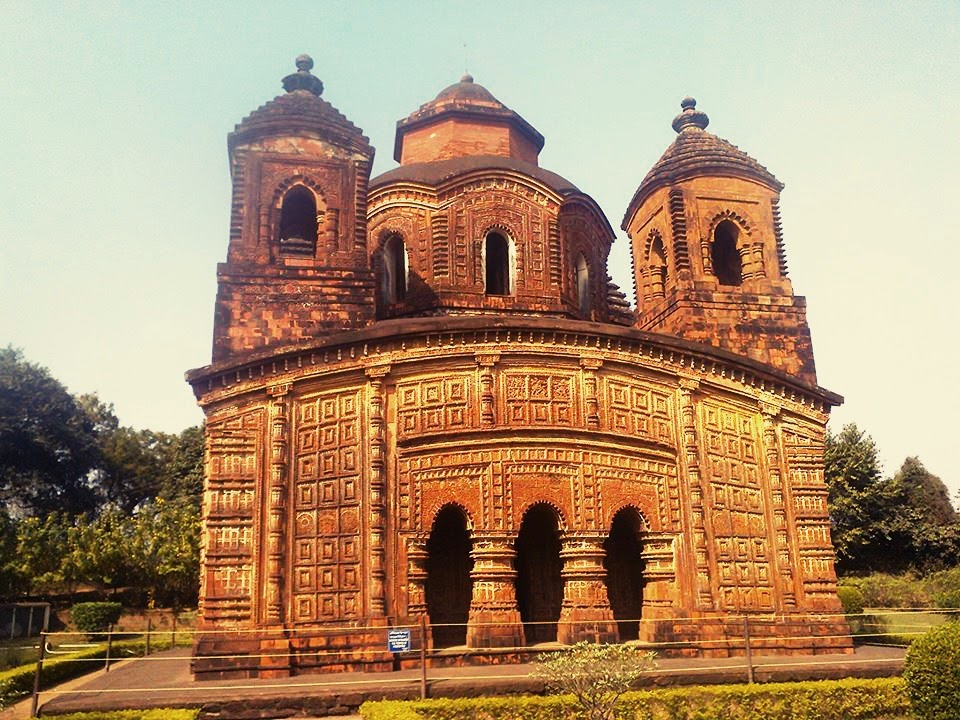 Shyamrai Temple or Pancha Ratna Temple of Shyam Rai - Built in 1643 by King Raghunath Singha. The walls are richly decorated with terracotta carvings featuring aspects of Lord Krishna’s life. It is one of the largest temples. 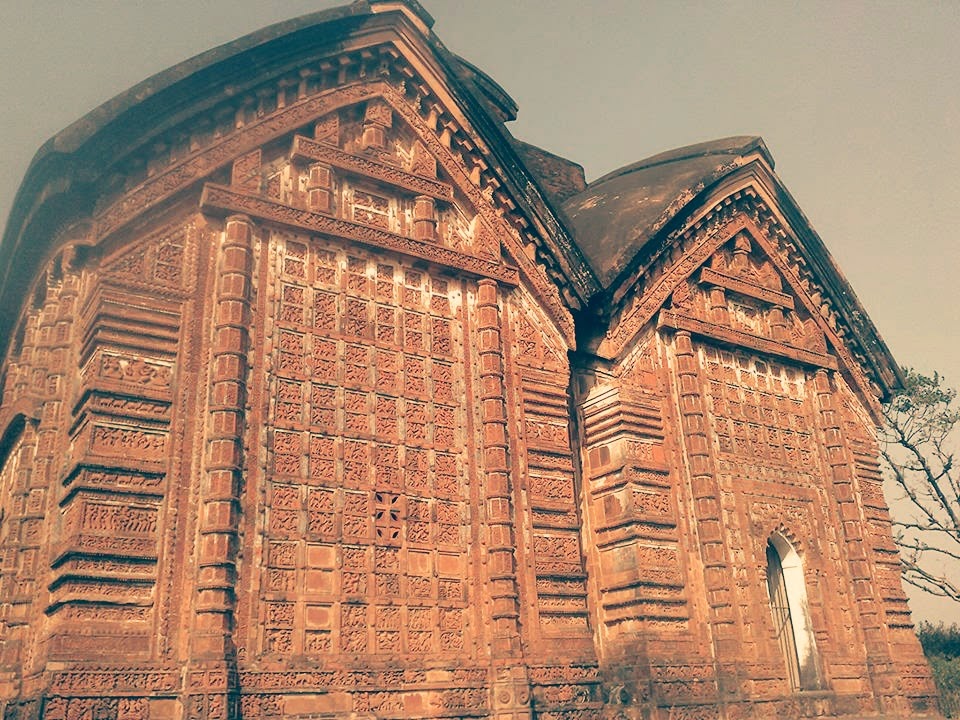 Jorbangla Temple of Keshta Rai - Built by King Raghunath Singha Dev II in the 17th century. The ornate terracotta carvings are set off by the roof in the classic chala style of Bengal architecture. 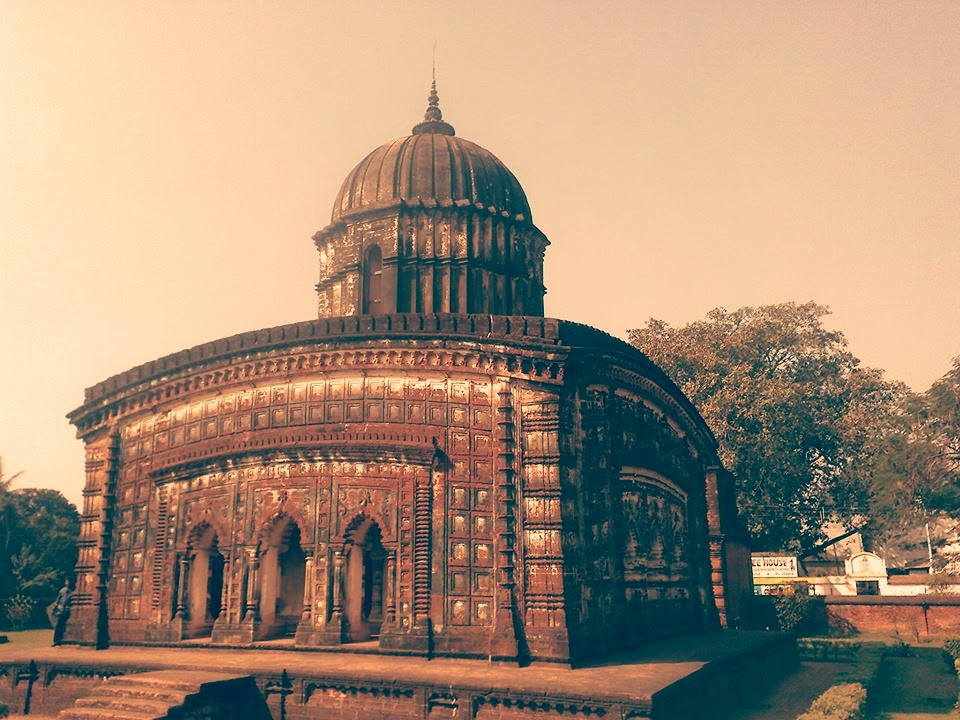 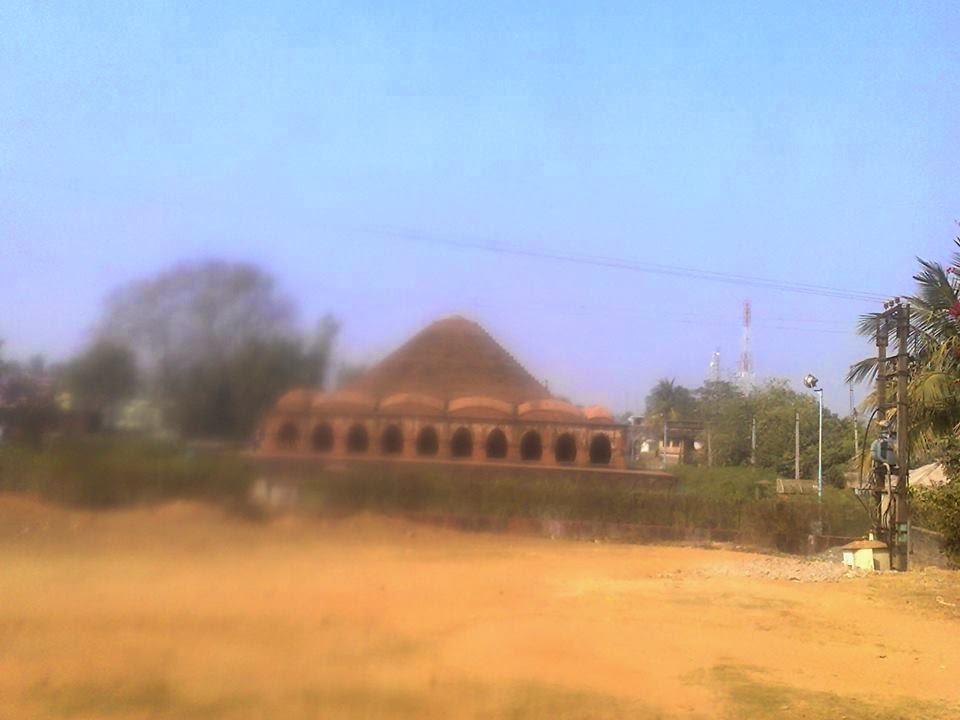 Rasmancha - Oldest brick structure. Built in 1587 by Bir Hambir is a pyramidal structure in the centre of the town, where the deities from the other temples are brought in a procession on the occasion of the Rasa Festival. There are some cannons of the Malla kings in the area.

The temples are ticketed, group tickets are available at Rash Mancha, so, its better to start from there.

The entire trip took us three and half hours to four hours and we boarded a bus from Bishnupur Bus Stand To Kolkata which dropped us in Kolkata at about 5:30 PM tickets were Rs. 70 per head as it was a government bus.

The Other Places which are not in the photographs:

Old haunting is the best one  They stay within you  And you visit them often They are mist surrounded When you first lay your eyes on them Within you they grow And they deceive you You did not ever know Then while you look back They again come back to you You remember the haunting And now that your innocence is snatched Ignorance has long shed its last tear You see, the reason they haunted The mist is clear The sun shines  And you look back and smile They are now with you You feel the warmth of old blanket It is still there, the old mist lingers Your old aroma in them is still fresh The days bygone are within you Those warm nights with cool breeze  Sing a song and you smile There is a pause And in this pause lies your life. (This one song was in my head for the entire week, It haunted me as a child, It now brings a smile...)